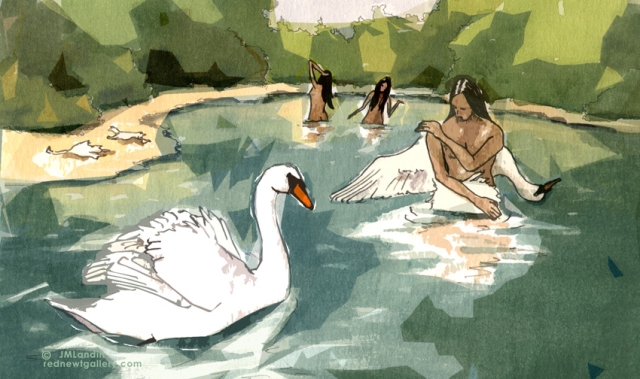 Birds are symbols of freedom and elusiveness, sensuality and romance, even tragic love. All these characteristics and more are prevalent in one of the most widespread of fictional narratives, the so-called swan maiden tales.

Though variations exist, these stories frequently feature beautiful women who present as swans or other avifauna1 until they disrobe to bathe or swim. Conflict ensues when a male interloper sweeps away one of the maidens to be his bride. Voyeurism, coercion, deceit, sacrifice, betrayal, and third-party meddling are common plot elements, so tales like these tend to explore a range of power dynamics. Storylines often address whether true love can develop between the maiden and her captor/rescuer.

For the protagonists’ relationship to survive—and it doesn’t always—the two usually must transform psychologically (especially to nurture or rebuild trust), and in some cases, physically (so that either are both human or both avian). As an example of the latter, in an ancient Irish text, the Celtic deity Óengus turns himself into a swan so he can join his swan princess Caer Ibormeith.2, 3 In a Swedish story with a different scenario and outcome, a hunter years later returns his wife’s confiscated feathered cloak. By doing so, however, he unwittingly reveals his culpability in the garment’s theft, destroying the relationship. The wife instantly morphs back into a swan and flies away, never to return.4, 5 “Happily ever after” is not a given, but in those tales where the woman resumes form as a bird and departs, reunion is possible if the husband can prove his love by completing a difficult trek to successfully locate her.6

Different versions of swan maiden tales exist throughout the world, with the Asian continent an important source of several. A couple (“The Story of Janshah” and “Hassan of Bassora and the King’s Daughter of Jinn”) are included in the One Thousand and One Nights (or Arabian Nights).7 Tchaikovsky’s Swan Lake, however, is probably the most well-known example. In the nineteenth-century Russian composer’s ballet masterpiece, Odette and Prince Siegfried are tested by a scheming sorcerer and his daughter. The two lovers die tragically but are reunited happily together as spirits.8 Though Swan Lake is arguably the most famous of such tales, the oldest likely originates from ancient India in the account of King Purūravas and the celestial nymph Urvaśī, two lovers tricked into violating a vow that results in their separation.9, 10

Narratives like these clearly transcend time and cultures, probably because romantic relationships and their dynamics are of universal interest. Part of such lore’s appeal may also lie with birds in general, a subject that has long fascinated the imaginations of poets, storytellers, and artists. Swans are significant due to their associations with grace, beauty, and the otherworldly, all aspects desirable to humans. The swan maiden stories acknowledge both the affinities and differences between our world and those represented by birds. Many of these tales offer us hope that humans are capable of great change and love.

’Tis the season for that peculiar Christmas carol, the one about a repeated litany of mostly live gifts, including dozens upon dozens of fowl, great and small—“The Twelve Days of Christmas,” a song that features more than enough birds for a large aviary!

Unfortunately, the winged creatures named in this tune—at least six different types—were likely included for another reason, as all of them have made their way onto dinner plates in Europe at one time or another. Mike Bergin, birder and founder of the website 10,000 Birds, offers a particularly enlightening post on this song and its “astonishing insight into the extravagant gifting conventions and ravenous appetite for bird flesh in England during the Baroque era” (1). Of course, much of the poultry named throughout this Christmas carol are still consumed today, but some much more regularly than others.

A Little History behind the Occasion and the Carol

For a better grasp of the context involving the song’s many birds, let’s consider a few things. First, the Twelve Days of Christmas occur from Christmas through January 5th. Secondly, as part of this long tradition, a feast day is held afterwards on January 6th marking the Christian celebration of Epiphany (2). So the inclusion of game birds throughout this song makes quite a bit of sense. Some people have even speculated that the golden rings introduced on the fifth day may actually refer to ring-necked pheasants (3). Anyway, the dozen types of gifts, with the exception of the golden rings (if taken literally as finger trinkets), could be considered either of entertainment or gastronomic value—all important for a large celebratory banquet commemorating the Magi’s visit to the Christ child.

As for the Christmas carol, evidence indicates that “The Twelve Days of Christmas” has its origins as a “Twelfth Night ‘memory-and-forfeits’ game,” a function noted in the first printed version of the song around 1780; and the game may have developed earlier in France (4). We do know that neither the song nor the game is mentioned in Shakespeare’s Twelfth Night. However, his play likely preceded the Christmas carol, for the former was composed possibly as early as 1599 (5).

When talking about such seemingly disparate things as geese-a-laying, maids-a-milking, and ladies dancing, context is critical. As mentioned earlier, the birds cited throughout “The Twelve Days of Christmas” have historically been used for food. The most obvious ones are the French hens and geese-a-laying, feast items today with a long culinary history. Like chickens, the greylag goose has been domesticated in Europe for centuries, its meat and eggs both used as food (6). The mentioning of both these birds in “The Twelve Days of Christmas” easily suggests some relevance to a large celebratory meal.

Due to changes in cultural and culinary preferences, the other birds may seem less obvious today as menu options. The partridge, the only fowl that appears every day on the song’s daily gift list, was “frequently served at medieval tables, where it was prized for its tender flesh” (7). It’s still consumed at dinner tables but ranks in popularity far behind larger poultry such as the chicken and turkey.

The turtle-dove, albeit symbolic of romantic love, has been desired for centuries by the stomach as well as the heart. After all, dovecots, structures built for housing pigeons and other small birds until ready for the table, were common in the Middle Ages and sometimes contained turtle-doves (8). Clearly the appreciation of a bird’s pleasing appearance and positive associations was not enough to safeguard it from the most basic of human instincts—hunger.

Today we value mute swans primarily for their beauty. But in the past, these large, graceful birds also made their way into English feasts (9). For instance, they were eaten on important occasions, such as Christmas (10). While the meat is reportedly not considered succulent, it clearly had its share of enthusiasts (11). One reason may have been its size, for an adult male mute swan can weigh more than 50 pounds (12). Scholar Venetia Newell also reminds us, “Chaucer says of his worldly monk in The Canterbury Tales (1387): ‘A fat swan loved he best of any roast’…” (13). Of course, the bird’s popularity as poultry for England’s aristocracy and grand feasts has significantly waned since that time.

Finally, we have colly birds, the fowl that was consumed primarily by the lower classes. Although in some versions the gifts are “calling birds” (as in caged songbirds such as canaries, starlings, and the like), the first printed version of the song uses “colly,” a word describing something that has been blackened, as if by soot or coal (14). So, in that case, we are actually talking about European blackbirds, which belong to the thrush family (15, 16).

People supposedly ate colly birds, while others apparently enjoyed watching live ones endure a cruel (but fortunately infrequent) dining practice. The birds, inserted inside a baked pastry that had been taken out of the oven to cool, were forced to entertain upper-class dinner guests by erupting from the served pie, as described in the nursery rhyme “Sing a Song of Sixpence” (17, 18). That poem, of course, refers to a pastry made with 24 of these creatures. By the conclusion of our Christmas song, the “true love” has handed out 36 blackbirds—an ample amount for one and a half of these large dishes. “Calling birds,” to me, seem much more preferable.

All in all, we have 184 birds given over the Twelve Days of Christmas. And if you consider the “five golden rings” as intending pheasants, the tally grows to 224. No matter how you look at it, that’s a lot of birds. You either have a major holiday feast in the works—one perhaps to end all feasts—or a heckuva re-gifting nightmare!