How could we have resisted spying on our new neighbors? Upon their arrival, they would sing by our windows and occasionally tap on the glass. Soon the couples expanded their families, turning each home into a mosh pit of hungry, but oddly cute, ragamuffins. At some point, we came up with nicknames for them (but more about those later).

Our new neighbors were house finches, and they had built nests inside two awnings. During the past few weeks, we had been checking in on them. Not only did the nests afford us the opportunity to intimately watch these birds give rise to a new generation, but we were able to further ponder how a species native to the western parts of North America, especially Mexico,1 had come to call North Carolina and the rest of the eastern United States home. Common today in all fifty states, this bird has a rather remarkable story.

From Tinseltown to Gotham

When Americans settled westward during the nineteenth century, they took a fancy to house finches. As many people today know, these birds love to build nests along human dwellings, which means that trapping them would have been relatively easy, likely resulting in part to their being sold as caged songbirds. Once captured, the creatures could be transported to other places—and indeed they often were. By the 1880s, American travelers had introduced house finches to the Hawaiian Islands.2, 3

In 1918, the Migratory Bird Treaty Act banned the human trafficking and sale of house finches. However, the practice continued for decades in the United States. The caged birds were even dubbed “Hollywood finches” by illegal bird traders so as to glamorize the species, making it more exotic and attractive to potential buyers. The “Hollywood” part of the name was a promotional gimmick, for the finches are native to the West Coast but also to other western states, not just Tinseltown and surrounding areas of California.4

As late as 1940, “Hollywood finches” were being sold in New York City. Increased enforcement, though, eventually ended the illegal sale of the birds—but with unintended consequences. Fearing visits by authorities, traders and pet shops ended up releasing their caged house finches into the wild. Eyewitness reports of the birds began circulating in New York City but quickly radiated out to neighboring states.5, 6 Today, house finches are found from northern Florida up to southern parts of Canada, but their rapid expansion has come at a cost.

Our recent neighbors are likely descendants of those birds released in New York City over seventy-five years ago. In most cases, each clutch gave rise to four youngsters. Covered partially in spots of down, the new hatchlings were not much to look at. My wife jokingly likened their appearance to moldy strawberries. But these hungry creatures quickly grew, sprouting other feathers. By the time the fledglings left their nest, the only visible sign of their down was several unruly sprigs above their eyes, a characteristic reminiscent of the brow hair sported by the late 60 Minutes commentator Andy Rooney.

To differentiate the birds’ stages, my wife and I often made tongue-and-cheek references to them as “Moldies” and “Andies.” They grew up fast! In a matter of days, the Moldies became Andies. And, boy, did those ravenous bushy-eyed juveniles keep their parents busy. The last of them, though, took wing a couple days ago. For now, our spying eyes have returned to the bird feeders.

“Hush, little baby, don’t say a word, Pappa’s gonna buy you a mockingbird.” Thus starts the classic lullaby. It’s one of the first songs many people ever hear. It’s also one of the oldest.

Orally transmitted, “Hush, Little Baby” was first documented in 1918.1 However, the tune may have much earlier origins, going back to a time when mockingbirds were more common as pets. The creatures were prized as caged songbirds through the 1800s. Praising the singing abilities of mockingbirds over nightingales, John James Audubon noted the popularity of the former as household pets in the United States.2 Among the owners of mockingbirds, Thomas Jefferson appears to have been the most famous. He kept several, including a favorite named “Dick.”3

Some rather old but well-known lyrical songs have mockingbird themes. For instance, in “Listen to the Mockingbird” (1854), the feathered virtuoso provides comfort and fond remembrances of a deceased loved one. Then there’s Irving Berlin’s “Ragtime Mockingbird” (1912), which consists of a lover’s playful plea for her very own winged music-maker:

A perennial muse of songwriters, this little avian wonder appears later in hits such as “Mockin’ Bird Hill” (1951), “Mockingbird” (1963), “One for the Mockingbird” (1987), and even a 2005 single by the rapper Eminem. (By the way, a post on some rock-era compositions featuring bird-inspired lyrics is available here.)

More Music from the Days of Yore

Lots of old-timey tunes exist that make either literal or metaphorical references to birds. “A Bird in a Gilded Cage” (1900), for example, is a song about the miserable outcome of marrying for money rather than for love.5 The Parlor Songs Academy website offers an extensive look at the bird-related recordings of the Tin Pan Alley period. There, among the avian fare represented in American music history, one will find numbers about the cuckoo, crow, robin, whippoorwill, and a few others.

Several archaic ditties familiar to U.S. audiences have roots outside the country. One of these is “The Cutty Wren,” an old English folk song related to the Wren Hunt tradition in parts of Scotland and Ireland.6 Chumbawamba, the British band best known for its 1997 hit “Tubthumping,” recorded a version of it. Here in the States, an even older song from England is “The Cuckoo” (also “The Coo Coo”) (1769),7 a classic that has since been covered by the Everly Brothers, Bob Dylan, Donovan, and many others.

A quick search on YouTube and music websites will turn up versions of many such tunes—as well as recordings of actual bird calls and songs, such as that of the northern mockingbird here from the Cornell Lab of Ornithology. Fortunately, thanks to the Internet, there’s no need to buy mockingbirds (which, if you’re curious, is illegal), cuckoos, or any other bird. Just go online or, better yet, venture outside! 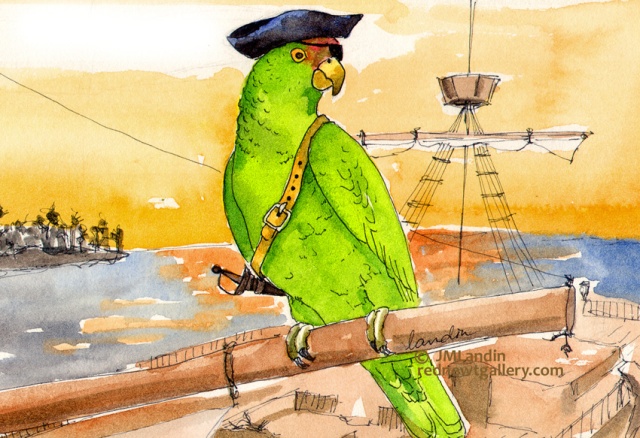 “Here’s Cap’n Flint—I calls my parrot Cap’n Flint, after the famous buccaneer,” says Long John Silver to the young Jim Hawkins. And so with the introduction of this saucy-tongued, sugar-nibbling bird in Treasure Island arises the trope that indelibly connects pirates with these pets.

Borrowing from Robert Louis Stevenson’s late nineteenth-century novel, pop culture has since bolstered this image. Parrots are depicted with pirates in subsequent literature, such as the Swallows and Amazons children’s book series of English writer Arthur Ransome, and in numerous cinema features, most notably Disney’s animated version of the J.M. Barrie classic Peter Pan and also the Pirates of the Caribbean movies. And if all this wasn’t enough, a costumed parrot mascot even performs at professional baseball games for the Pittsburgh Pirates.

Only One Cap’n Flint?

On the surface, the notion that a few sea marauders of the Atlantic kept pet parrots seems plausible. After all, Christopher Columbus reportedly brought back dozens of the birds from his voyages, even offering a couple Cuban Amazon parrots as gifts to Spain’s Queen Isabella (1, 2). Within years of the explorer’s first expedition to the Caribbean, the parrot trade surged. The birds fetched high prices from wealthy and high-ranking Europeans who fancied the exotic creatures (3). By the seventeenth and eighteenth centuries, buccaneers frequented tropical areas. And while there, some would have taken parrots and other exotic animals onboard, if not as pets then at least for purposes such as bribery or trade at coastal settlements (4).

Under the Black Flag, David Cordingly’s historical accounts of maritime piracy, and Parrot Culture, Bruce Boehrer’s book detailing the socio-cultural impact of his avian subject, both credit Stevenson’s novel for popularizing the pirate-parrot link (5, 6). However, no mention is made specifically of sea brigands who considered such birds as their pets. In this sense, Boehrer refers to Stevenson’s Cap’n Flint as an “artistic embellishment” (7). On the other hand, Cordingly relates several accounts of buccaneers bribing English officials, offering the birds as a form of enticement or as a shrewd manner for acquiring favors (8). Whether any pirates kept parrots as companions seems questionable. Clearly, though, the sea brigands had access to the birds, as did many adventurers of that time.

Aside from buccaneers, seaman, and merchants who sailed overseas, only the wealthiest and most well-connected of people could obtain parrots. Pirates, though, didn’t really need them as pets, even if some may have occasionally regarded parrots as “souvenirs of their travels” (9). The value of these creatures is still undeniable, but other items held much greater interest for buccaneers. For the most part, they were seeking treasure as well as the replenishment of food and drink, arms, and supplies for their ships (10).

As to the reasons behind the parrot’s popularity with European aristocrats, a couple of characteristics must be considered. First, the bird hailed from far-away origins and boasted colorful plumage. Second, along with its exotic features, the parrot’s ability to mimic human language made it a highly desirable conversation piece—literally—for collectors (11). Obviously, the repeated litany of comments from Long John Silver’s pet created a lasting impression on pirate enthusiasts. Yet for the young protagonist in Treasure Island, the experience appears to be more than just unforgettable.

Jim Hawkins reports at the end of Stevenson’s novel that he’s still haunted by nightmares of Cap’n Flint. In those dreams, the green parrot continues to squawk excitedly about Spanish silver coins. “Pieces of eight! Pieces of eight!”(12)