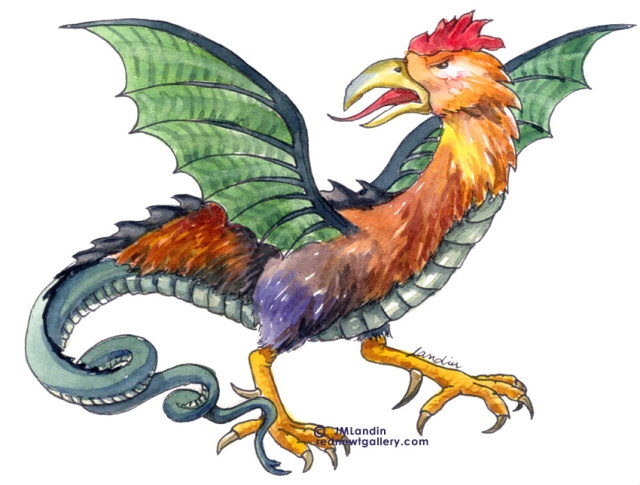 Monsters have been known to take many forms, from seductive succubi and skulking bogeymen to blood-slurping chupacabras and giant krakens. Among the most unusual and horrific of such creatures has to be the cockatrice. Associated with demonic forces and deadly powers, this small, peculiar beast stirred panic in the hearts of late-medieval Europeans.

Part-bird and part-snake, with bat-like wings, the cockatrice was believed to be the offspring of a farmyard oddity—an egg-laying cockerel.1 If anyone discovered such a rooster, prompt and severe actions were required. First, retrieving the egg before it was incubated by a toad2 or snake3 was necessary, so as to prevent the cockatrice from developing and ultimately hatching. If the rooster was really thought to have laid an egg, then the fowl had to be destroyed so that no other eggs were produced. Again, such matters were taken very seriously, as demonstrated in 1474 by the people of Basel, Switzerland, who put their alleged avian culprit on trial before burning it at the stake.4

The possible existence of creatures in conflict with the natural order of things was a terrifying prospect to people centuries ago. What the cockatrice and its supposed egg-laying cockerel parent represented were affronts to a fixed delineation between the sexes and between species. Aberrations could be seen as crimes against nature, involving witchcraft or the meddling of a sinister supernatural realm. Danger was apparent in the cockatrice’s form, of course, in other ways. The creature supposedly had scales and a snake-like tail, key physical characteristics shared with the devil. (Passages in the book of Revelation (12:9 and 20:2) describe Satan as a serpentine entity, an idea John Milton used with memorable effect in his Paradise Lost.)

Not surprisingly, the cockatrice became synonymous in medieval bestiaries with another ancient and menacing snake, the basilisk. Perhaps most familiar today from J. K.  Rowling’s 1998 novel Harry Potter and the Chamber of Secrets, the basilisk has a long history. Belief in such a beast extends at least as far back as the first century, described in the writings of both Pliny (Natural History) and Lucan (Pharsalia)5 and later misattributed to venomous creatures of the Old Testament.6 Similarities were said to exist in the lethal prowess of both the basilisk and cockatrice, as they were reportedly capable of delivering venomous bites and emitting a poisonous odor.7 Their usual mode of killing, however, consisted of simply staring into a victim’s eyes, a notion popularized in Shakespeare’s plays.8

Science to the Rescue

As serious inquiry replaced superstition, monsters from the Dark Ages came to slowly be dismissed. Scientists of the Renaissance and Enlightenment rejected the flimsy evidence—mostly hoaxes9—of a half-bird, half-snake cockatrice. Unraveling the mystery behind the egg-laying cockerels, however, took a bit more effort. The eighteenth-century French scientist François Gigot de Lapeyronie was the first to conduct rigorous investigations into the subject; his studies concluded that the roosters in question were actually hens.10 Subsequent research has since demonstrated that female fowl with certain ovarian diseases can develop some of the physical characteristics of their male counterparts.11

So unbeknownst to the residents of fifteenth-century Basel, Switzerland, the egg-laying rooster they prosecuted was probably a hen with some hormonal ailment. The cockatrice that haunted medieval Europe never materialized, for the beast with deadly eyes was only a freakish fiend hatched from unfounded fears, another testament to the irrationality of human nature.

6 thoughts on “If Looks Could Kill”